Letter from Gilbert & George to The Krasnals

On Friday, the day after the Conservatives won the general elections in Britain, we have received by mail a letter from Gilbert & George. Previously, we sent them the photo of our painting "Church of England by Gilbert & George, starring Angelina Jolie as Lara Croft" - from the "Brothers In Arms" project presented in December at the exhibition in Warsaw. We referred by this image to the exhibition of Gilbert & George 'FREAK JACK PICTURES' in Mason's Yard in 2009. Works of these artists approach to fundamental questions about religion, identity, politics, economics, sexuality and death. The dominant elements in our work - as in the paintings of G & G - is the British flag (Union Jack), and profiles of artists. Centrally above them stretches crucified Angelina Jolie as Lara Croft. She dethroned Jesus, the main character of the image "The Chuch of England." Artists represent the British flag in the company of Jesus as an oddity, as they are against organized religion. So we suggested to put in the image another disobliging company, British hero - Lara Croft - regarded by the British as the queen of sex. She is also nice, friendly and energetic.
Thank you G & G for the nice letter to us, we are highly appreciated.
And this is the letter from Gilberta & George:
Dear The Krasnals,
Thank you for sending us your picture. We are pleased that our work reaches to the young artists in Poland, and of course that you are interested in our images. We are impressed with your version of The Church of England with Lara Croft in the main role. Indeed this truly connects contemporary fashion and the national pride of the British. At least in the opinion of the majority of the British, Angelina Jolie is one of the biggest sex symbols ever. We like being at the foot of Lara. We like such funny absurdity and as well it matches our Jack Freak Pictures.Your making of jokes to the world of the art, especially left-wing followers and promoters, makes us laugh. We are annoyed by the artistic community pushing its artists to the left-wing, discriminating against all signs of conservatism. We have always been conservative, staying in opposition to collectivism.
We wish you good luck with your future projects, a lot of laughs and a feeling of freedom from the art world and its love of falling into patterns.
Gilbert & George 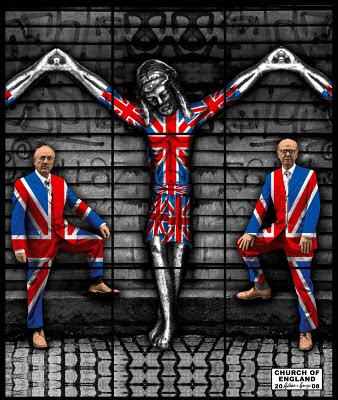 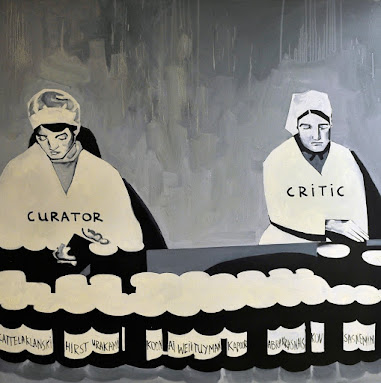